That rhymes, you’ll notice, and the first time that thought popped into my head, I noticed it too. Since then, whenever I exercise for exercise sake, that’s my mantra. It has a nice one, two, three rhythm. Like a waltz. Only faster. It goes well with the elliptical machine.

Now you may well say that I am defeating the purpose of exercise by being so down on it, but it’s not true. I am validating my detestation, and thereby allowing myself the freedom to hate it, even while I accomplish what it is meant to do—extend my quality and quantity of life by maximizing my protoplasmic capabilities for as long as possible.

You will never see me running. Runners wear expressions from the seven stages of the cross that terrified me in my short catholic upbringing. Swimming? Too cold. Too wet. If I must exercise (and I must, after all I tell my patients they must, and I’m a firm believer in trying not to be a hypocrite), you will find me weight lifting and doing cardio intervals, because I have discovered I can tolerate even things I hate for 30 seconds at a time, and it turns out this is enough to sweat my body into shape. At least that’s what the research says this week…

However much I despise exercise, I love being active, whether it’s transplanting shrubs, moving the woodpile, or building a sidewalk. I even like shoveling snow and pulling weeds. Being outdoors is integral to my satisfaction with life. (I just realized: the only thing that could be better about my working on SJI is if I could see my patients outdoors. I confessed this to a patient recently and we both had a good laugh, deciding that San Juan Island would be just the place for that idea to take off!)

Here on the island, or at home, walking is one of my favorite activities, a time for contemplation and gratitude, a time to shrug off tension and worry, a time to solve problems, and a time to forget them. A good walk is a blank page on which to write a story. A wakeful dream where thoughts can float, and merge, drift and evaporate, like clouds.

While Rob was here, he and Tippy took a walk every day to soak up the bustle in the busy little village of Friday Harbor. The people, the ferries, the cars, bikes and boats. We walked each evening too, so I could get my fill of all the beauty this island has to offer. As though I could. As though anyone could. But since my loves are gone back home, I have sought solitude on my walks, eschewing the village for the coastlines and coves, the rocks and the heights, the towering fir forests and the gnarled Garry oaks. I have sought out eagles and whales, held my breath as deer passed by, so close. And I’ve noticed how sounds peel back, like the petals of a flower, when I’m alone. 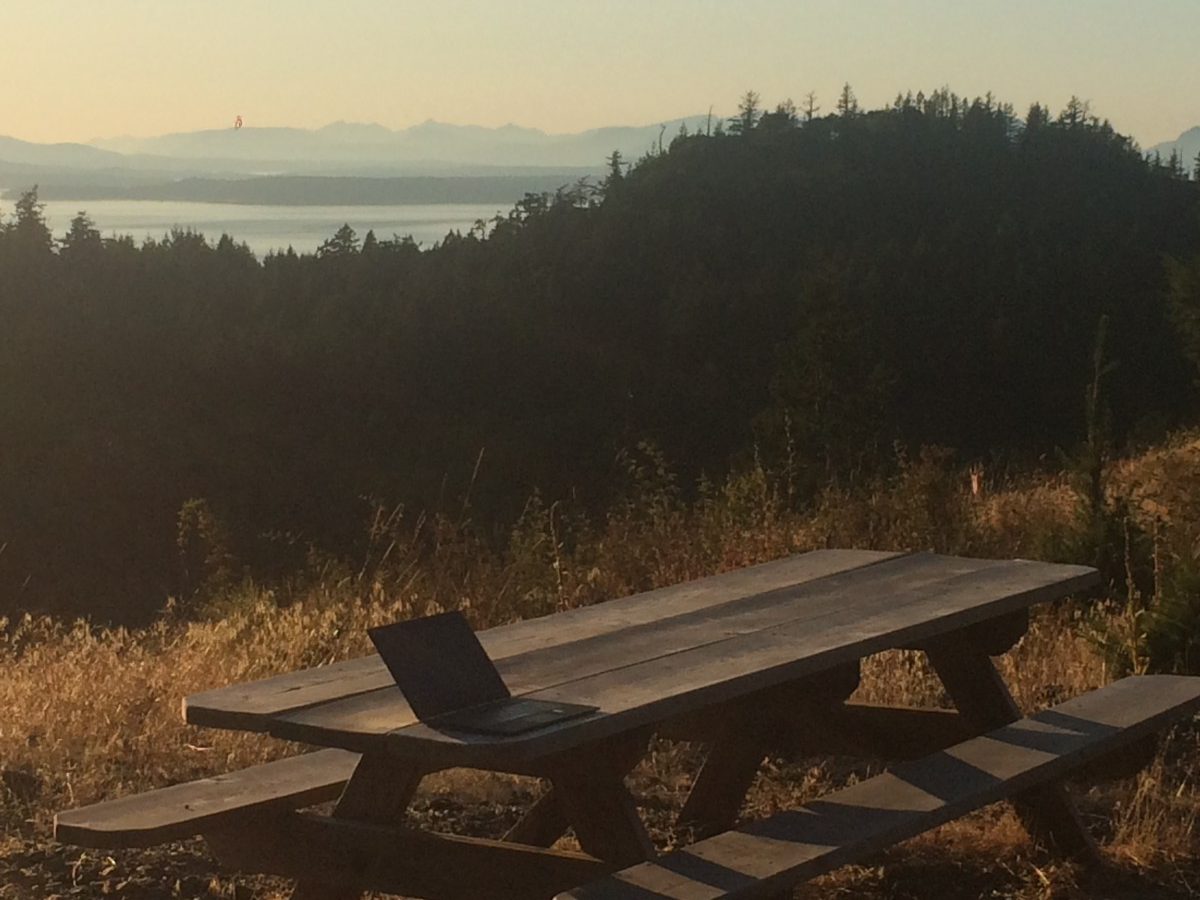 I sit now on top of Mt. Grant typing this. You can drive up here on Sundays— but it’s Monday—and the rest of the week you have to walk the mile and a half uphill. The walk starts in a towering fir forest, with centuries of pine needles cushioning the path. I am first aware of my footfalls, and the fact that they are uneven—my left seems to flap a bit, while my right seems, well, not-flappy. It’s just a snippet of sound, not much to it, but it keeps me company. I marvel at the fact I can hear it at all, footsteps on a carpet, that quiet. 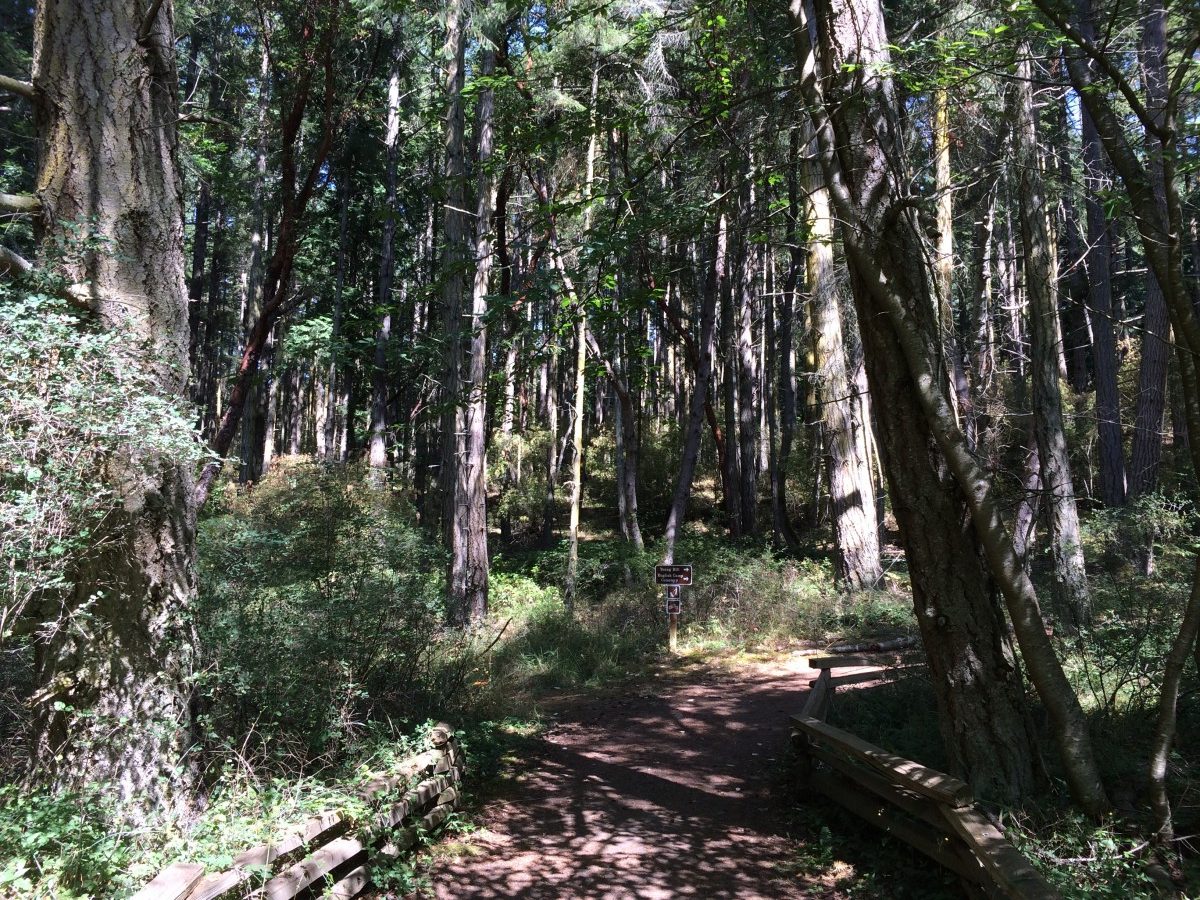 Which causes me to wonder why I can’t hear anything else. And then I do. I hear the sound of a car engine in the distance. The road, after all, isn’t too awfully far away; the whole island is only 8 by 20 miles. The engine disappears, but soon there is another grumbling, it’s distant, then closer: a plane coming in for a landing, no, a helicopter, which, with its beating rotors, makes a different sound than the single propeller of the small planes that fly here. It fades, its pulse lingering longer than its form.

The wind has been tame during my stay here. But I find its delicate notes here, in the treetops, whispering its way to my ears like a lover.

I am amazed there is no birdsong. Not a twitter or scurry of a small animal in the whole forty minutes of climb. I see a bird soaring on thermals, but it makes no sound. It is eerie, this absence of critters. I’m not sure what to make of it. I think I must ask someone.

I know there are owls. We hit one with the car. A great big barred owl. I know that’s what it was because after, when the adrenaline and the guilt wore off, I looked it up. After we screamed when it rolled up the windshield in slow motion. After we braked, but not soon enough to completely avoid it. After we found a place to turn around, and the great bird—thank goodness—had moved to the other side of the road, where it continued to sit like a giant bowling pin on the asphalt, exactly as we had encountered it, coming around a blind curve at dusk. This time we avoided it and pulled over. I tried to shoe it away, gently, with a twig. Like Poe’s raven, it remained, swiveling its massive head effortlessly, looking at me, through me. Five seconds, ten, fifteen, the owl and I were locked in mutual regard—standing there stunned, waiting for the next car to round the bend and hit both of us. Finally, it broke the spell and flew into a nearby tree. 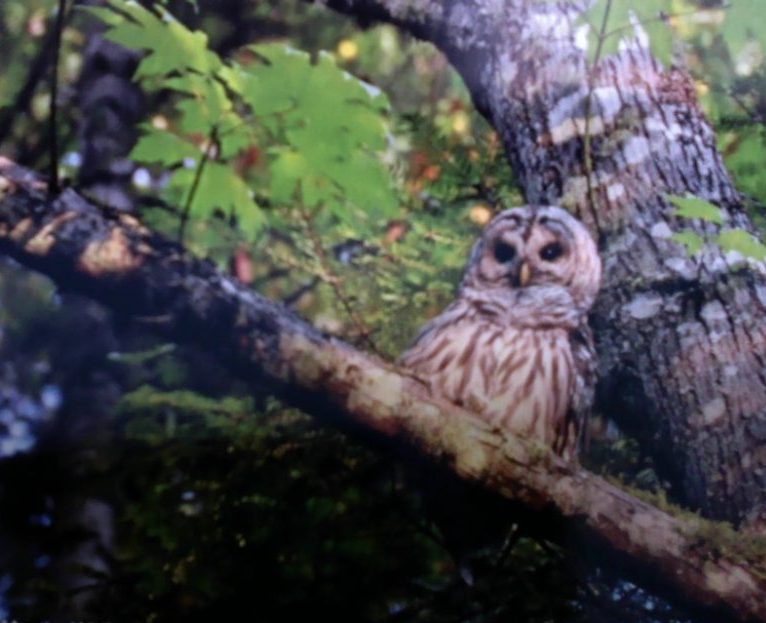 Rob and I ventured a sigh of relief, of hope. The only owl on the mountain today is the one I can’t get out of my head.

When I break into the sunshine, a meadow of sun-burnt grass greets me, rolling down the slope to the shore, and though I strain my ears toward the waving blades, I can’t hear them. The Olympic Mountains, only 15 miles away across the Haro Strait, are visible now as I near the top of my climb. In the lazy haze of afternoon they are a string of silver sawtooths drawn with a child’s crayon, a flash of snow winking here and there off the highest peaks, stealing all our rain but rewarding us day after day with Camelot clear blue skies.

Startled grasshoppers wing past me, tatta-tatta-tatta, as I negotiate my last steps through thickets of thorny shrubs daring to eke out an existence in the arid landscape of this summit.

Standing at last on glacial-carved rock, 600 feet above the sparkling sea, there is nothing left but a faint ringing, the sound of silence in aging ears. 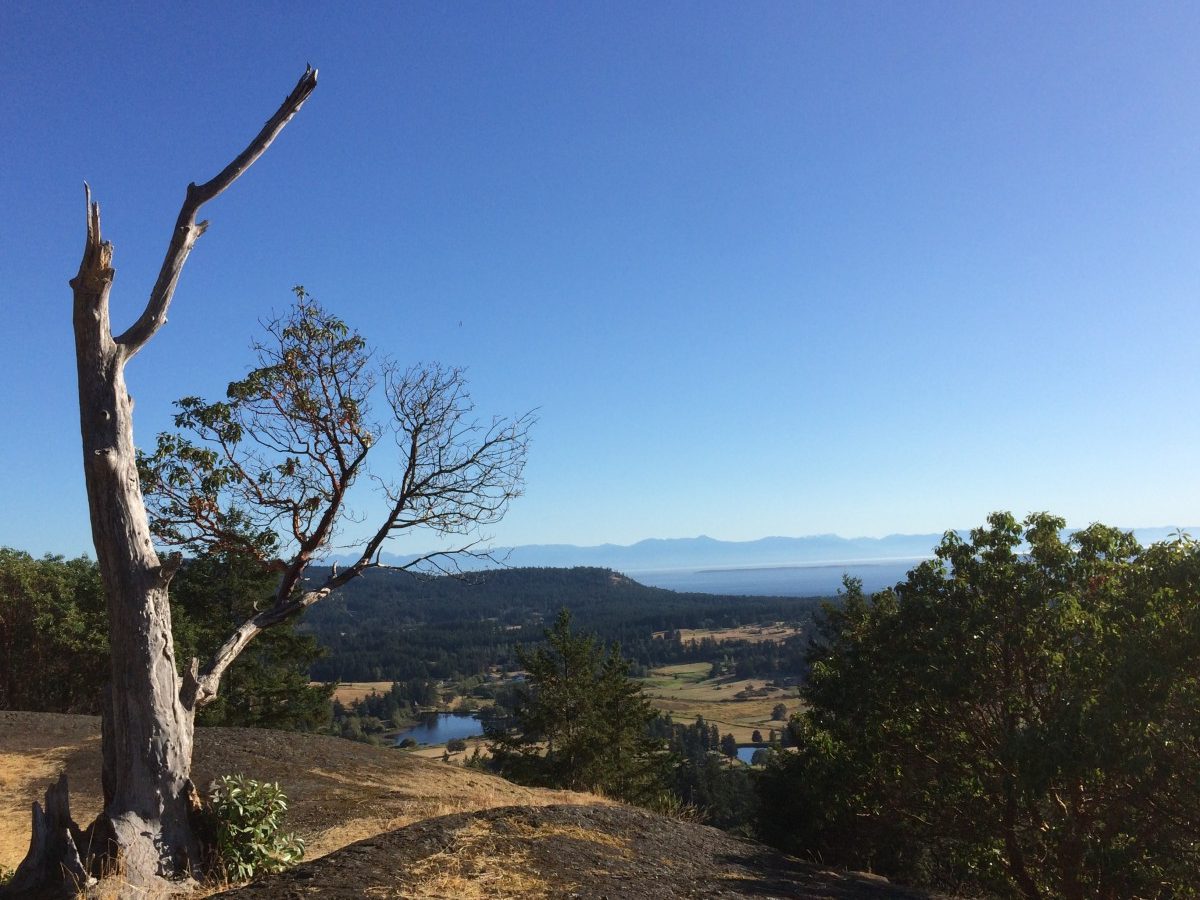 Or so it seems.

Then, comes the crunch of tires on gravel rising and falling through switchbacks, like a bee buzzing back and forth among flowers. Closer now. The engine cuts. A car door. Two. Footsteps. Others have joined me here, at the end of the world. No worries, there’s plenty of space.

I wonder if they can hear it too. 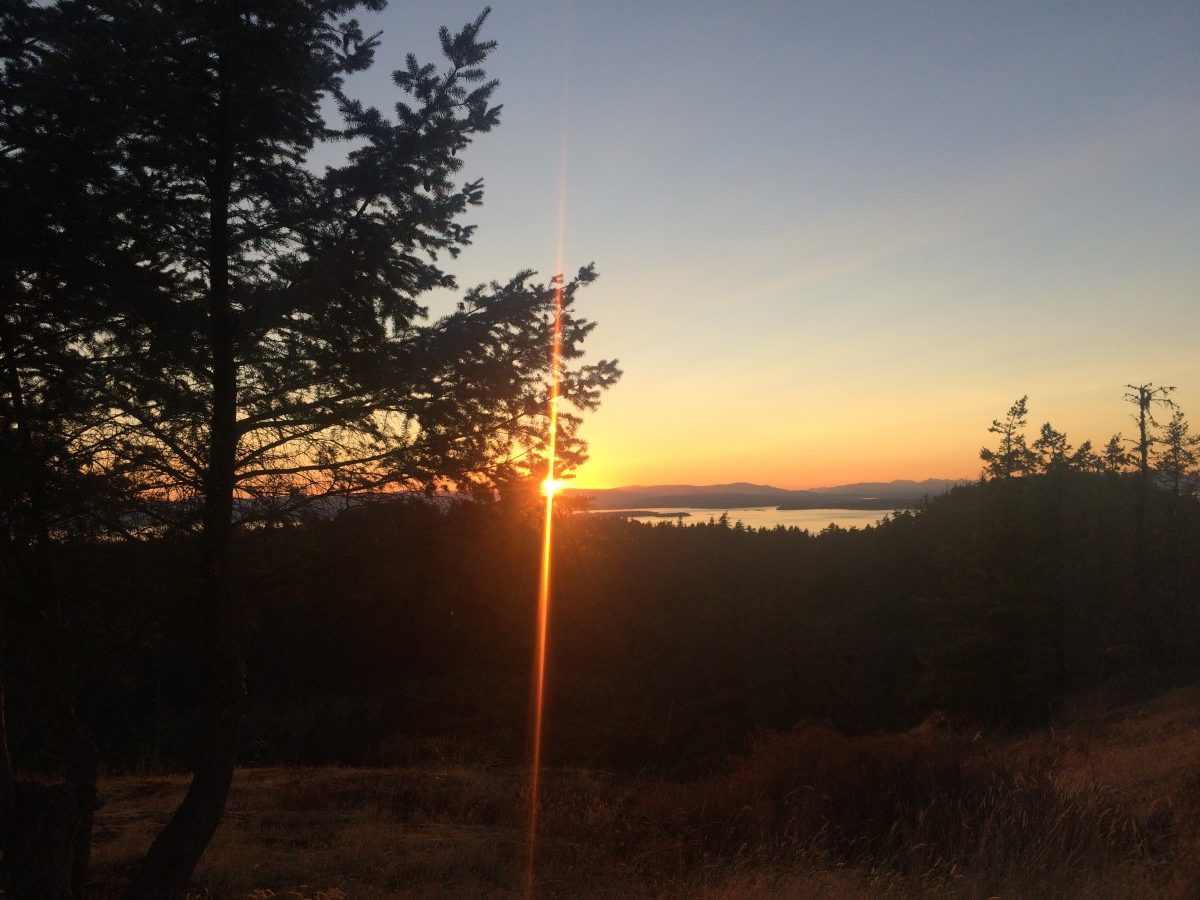